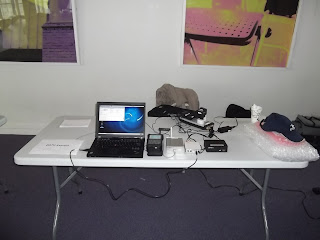 The convention was a great success and I really enjoyed meeting
people and talking digital TV for an entire weekend. I don't think
I had a single conversation about analogue TV at all other than
a non ATVer asking me whether there was any analogue Amateur
TV left in the UK.

Above is my table at the convention where I demonstrated
DATV-Express to the public for the first time.
At the left is a Linux Laptop running Fedora 14, next to that a
Satlink WS-6918P which I used to show the received
DVB-S/S2 pictures and constellation, next to that the DATV-Express
board in a small box then the HVR-1900 USB MPEG2 compressor
and on the right an Emprex picture viewer that I used to generate
video (both still and moving).

Originally I was going to demonstrate DVB-S but in the end all the
demonstrations ended up being DVB-S2. I showed principally the
QPSK, 8PSK and 16 APSK modes. Thanks to everyone that stopped
by my table for a chat. A big thanks to Noel G8GTZ for organising
everything.