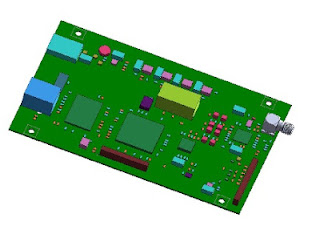 I have not posted for a while about DATV-Express, don't worry the elves have been
busy working on it. Tom WB6P has been laying out the board and it is looking really
good. It is smaller and more densely packed than before. See 3D model above.

On the software front I have been playing around with DirectShow filters with some
help from Brian G4EWJ (of Digilite fame). I have managed to capture video using
a USB2 capture device (PVR-1900) then transfer it across the network to my Linux
machine which runs the DATV-Express software where it is transmitted as a DVB-S
signal  on 1249 MHz. I know that does not sound much but earlier in the week  I was
starting to get very worried that I wouldn't be able to get DATV-Express to work under
Windows. I already have the USB download of firmware to the Express board working
under Windows and the last unknown was how to get the captured video into a program.
I am now happy it can be done.

It would be really neat to write the DATV-Express software as a DirectShow filter,
then using GraphEdit (or alternatives) people could make drag and drop transmitter
chains using different codecs and capture devices. I have never written a DirectShow
filter so whether I will do that I don't know yet. The first Windows version will probably
be a clone of the Linux version.

Seasons greetings to anyone that reads my blog and fingers crossed, 2013 will be
the year of DATV-Express.