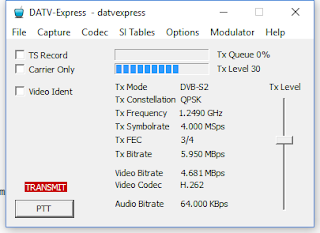 I have been keeping busy even though I have not posted for a couple of months.
After the AMSAT-UK conference it became obvious that DVB-S2 would take
a staring role in the new Es'hailsat 2 Satellite (which apparently is named after the
Arabic name for the star we know as Canopus). The satellite is now scheduled for
a Q3 2017 Launch.

To this end I have ported my Linux DVB-S2 implementation over to Windows.
The actual implementation is a C++ class and runs almost entirely on the host.
This means it uses more CPU than the DVB-S implementation does. I am still
ironing out bugs, by that I mean stuff I have working fine, when given to others
to test is not quite as successful.

While we have receiver support for normal symbol rates it may be a while before
we have RBTV (Reduced Bandwidth TV) support in place. Still we have a year
to get this all up and running.

I have also started a new challenge and that is the development of a GPU based
DVB-S2 receiver. I have done some similar work in the past but not at these
high symbol rates. DVB-S2 was specifically designed to take advantage of
parallel processing. I have been looking for an excuse to use the 2816 cores on
my graphics GTX 980 TI card. Originally I had planned on just implementing
the LDPC decoder on the GPU using the "Belief Propagation" algorithm but
bit by bit it is looking like most of the modem will in fact be on the GPU as
it is a better fit than on the CPU.

After having struggled with Graphics Drivers when installing the NVIDIA
Cuda 7.5 toolkit on my Linux machine it came as  a relief when I found how
simple the Windows Toolkit was to install. My only  mistake was not installing
Visual Studio 2013 before the toolkit. The current Toolkit does not support
the 2015 edition I was using for development.

The GPU modem is more an academic exercise than something that would be
practical for most people.

I am currently looking at ways to estimate the noise variance on the
communications channel as this is required to calculate the Log Likelyhood
Ratios LLRs which are required for the BP algorithm.
This is really pushing my maths skills. Wish me luck!