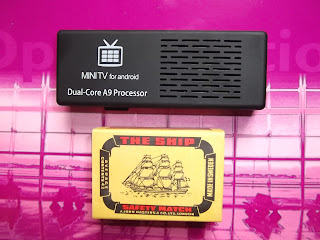 This week I have been playing with a modularised version of my DATV host software
with the help of Rob M0DTS. This allows the software to be run on small embedded
processor boards like the inexpensive ARM based MK808 media player or even the
Raspberry PI. To get some idea of the size of the MK808 I have posted a picture of it
above. It is a dual core ARM A9 processor running at 1.6 GHz. I paid £32 for the
MK808 from China but they can be got for £39 from the UK. It is necessary to
replace the Android software with Ubuntu Linux, Rob used the Picuntu distribution.
As these things can be dual booted you don't loose Android.

I don't have a Digilite and the new DATV-Express hardware is not ready yet so Rob
did the actual testing of the software. He managed to transmit a 4MS/s DVB-S
DATV signal using a MK808. For input he used a PVRUSB2 and the output a
Digilite. So I think we have shown you don't need a Windows PC to transmit
DATV anymore. While I don't expect the Raspberry PI to be fast enough to work
with a Digilite it should be fast enough to work with DATV-Express as a lot of the
heavy lifting will be done inside the FPGA.

The code consists of a number of small modules than can either run on an
embedded processor board or as part of a DATV application running on a standard
P.C.

I am thinking of converting the modules into GStreamer objects mainly because a
number of manufacturers only allow access to their GPU accelerated video engines
via GStreamer.

I still have to look at the receive side. Most of the Linux based media players are
aimed at broadcast TV and they are not particularly Amateur Radio friendly as far
a setting up is concerned. GStreamer provides video display windows that can be
embedded inside your own applications so putting together an Amateur Radio
friendly receive system should not be too difficult. I may leave this as a project
for someone else.
Posted by G4GUO at 11:08