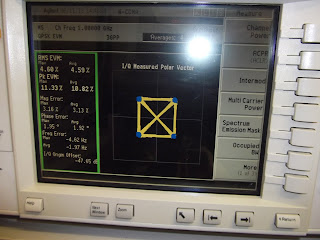 Above is the EVM measurement taken of DATV-Express using an Agilent E4406A.
It is of an unmodified board with no IQ offset applied. Some of the error is due to
a symbol rate mismatch between Express and the test gear. Express derives it's
symbol rate from a cheap xtal oscillator (the one used for the USB2 clock).
When generating the same waveform using an Agilent E4437B using a common
reference the EVM is only a couple of percent better.

The tests were done using the W-CDMA option that allows QPSK EVM
measurements to be taken provided the symbol rate is around
4 MSymbols per second.