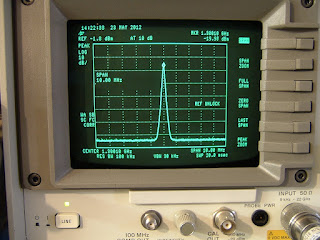 In case you were wondering after a few months, things have
started to happen with the DATVExpress project again.
The Fractional N PLL is now working and will tune between
850 and 1650 Mhz, so it will cover the entire 23 cms band
with ease.We can download both FX2 and FPGA firmware
to the board from a Fedora Linux system and can control the
transmit frequency and level.

Initially I was not impressed with the noise sidebands of the
oscillator but it appears the problem was to do with how I was
writing to the DACs rather than the oscillator itself.
After some fiddling I am now getting about -60dbc
which is about what the datasheet says I should be getting
(assuming I have measured it correctly)!

We are now working on the FPGA and FX2 controller software.
The prototype boards are pretty hacked about now so a new
run of the modified boards will be required before we have
a usable product. At least I now have something that can be used
for software development.

I have been asked this by a number of people (two actually),
DATVExpress although designed for Digital  TV is a general
purpose Software Defined Transmitter and with the right
software can transmit on just about any mode with a bandwidth
less than about 8 MHz in the 23 cms band. I hope people will
find really neat things to do with this board when it is available.