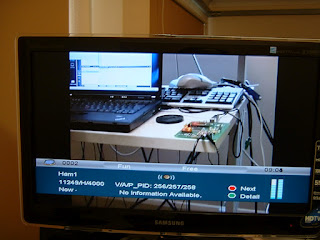 The above picture is the first DVB-S transmission using
a DATVExpress prototype board. The picture is 4MSymbols/s
with FEC of 1/2. The Express board is being used as a
'soundcard' and is being fed with samples at 5MSamples/s.

This will not be the final configuration but is what I call
raw mode and allows the transmission of just about any
waveform that can be generated by the P.C.

The test has thrown up some issues with the hardware
which need investigating (mainly IQ imbalance), they
are not show stoppers.

I have tested it with all FEC rates available in DVB-S.
I will probably have a go at transmitting DVB-T but
first I want to add an interpolating filter inside the
FPGA so I can sample at a higher rate to reduce aliasing.

I am no longer on the project's critical path so I can
now go back to my maths studies.
Posted by G4GUO at 17:18