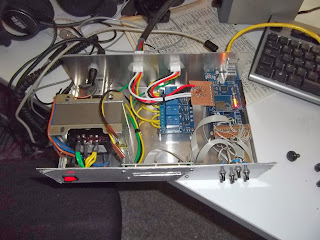 To avoid having to rush out in the middle of watching a TV program to track
the Funcube. I threw together a little home brew rotator controller based on an
Arduino Mega. It supports the Hamlib commands over an Ethernet interface so
it can be placed anywhere on my network. I am using  GPredict to control it.
I still have some work to do adding a 12v PSU regulator board to it and replacing
the LCD display which is very old and has poor contrast. At the  moment I don't
have an elevation rotator so I can't test that part of it. However it tracks the satellite
well and I can leave it to do it's thing while I watch TV.

Update: The controller has been sitting in my freezing workshop tracking funcube 1
lights out for the last 3 or 4 days.