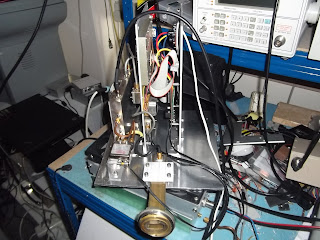 Here is a picture of my attempts at 10 GHz DATV. Mainly using bits either from eBay
or bought from fellow Amateurs. The LO operates at 9 GHz and is based on one of the
modified Stellex YIG units that can be bought on eBay. I have made a couple of mods
to it one is to increase the output using -10 dB directional coupler (eBay). The other
is to lock it to a GPS conditioned 10 Mhz source. The transmit mixer is an SMA mixer
rated to 12 GHz. The transmit filter is based on an 8 GHz filter (eBay) which I took
apart and filed down the elements so it now covers the 10 GHz band. Finally the RX
mixer and 2 watt PA are from an EYAL GAL unit obtained from G8CUB. The TX/RX
relay is a standard 18 GHz one and the coax to WG16 transition is homebrew using a
T bar configuration. The TXIF is provided by a DATV-Express unit operating at
1.25 GHz. The PLL programming and TX/RX sequencing is done with a small PIC chip.

I am getting about 1 watt of CW out of the unit measured on a Gigatronics
18 Ghz power meter and about 400 mW of clean DVB-S/S2. On receive I can
plug my portable satellite finder into it. At the moment the TX filter is tuned to the
middle of the band so I have actually been testing on 10.25 GHz. I have also done
some receive DVB-T tests using a standard TV plugged into a PLL satellite LNB
with the TV tuned to 550 MHz.

I have done some spectrum testing of DATV-Express and a Spectran 30 watt Class A
amplifier on 13 cms. Running at 8 watts output the first shoulders of the DVB-S signal
are at -50 db. There are a couple of signals either side of the main carrier at the PFD
(Phase Frequency Detector) frequency of 40 MHz. They are within what the
manufacturer specifies. This does mean a bandpass filter should be added to the
output of the Express board before being used on air. The spurii levels are frequency
dependent in that the spurii at 300 MHz are some 20 dB less than they are at 2.4 GHz.

My next challenge is to get to grips with the ModelSim package that comes with
Quartus FPGA development tools. My designs are starting to get to the stage where
I will need to simulate them rather than the technique I currently use of debugging
with real hardware.
Posted by G4GUO at 10:51