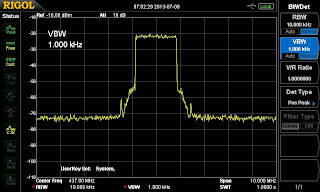 2 MHz DVB-T
I have been doing some changes to the Linux software for DATV-Express.
Instead of using 32 bits (16 bits I channel, 16 bits Q channel) to send each
sample across the USB2 link I am now using 16 bits (8 bits I and 8 bits Q).
The resulting constellation pattern looks no different from the previous version.
This has two advantages, firstly it halves the bitrate on the USB2 interface and
secondly it resolves the possible ambiguity between the I and Q channels.
The I channel always uses the top 8 bits and the Q channel the bottom.
I currently operate the Cyprus chip in 16 bit mode.

The other change I have made is to replace the 16 bit fixed point FFT in
the DVB-T code with a floating point FFT (more accurately an IFFT). I
am using the FFTW libraries for this. The result is that the unwanted out of
band signals have diminished considerably. Obviously the MMX based FFT
I was using was suffering from truncation errors, although it used 16 bit
maths effectively it only had 14 bit internal resolution.

I bought a job lot of 800 Mhz amplifiers, filters and mixers on eBay a couple
of weeks ago (mainly for the milled boxes). The filters will re-tune down to
440 Mhz and up to 1.3 GHz. The amplifiers cover a similar range. It seemed a
shame to pull them to pieces just for the boxes. Yesterday I had a great idea.
Why not used them as part of a high performance digital receiver! I also
have in my junk box a TI 170 Msps 16 bit ADC EVM and a DE2-115 FPGA
development board. Coupled with G4JNT's new 6 GHz synth boards they have
the potential of making a really neat high bandwidth radio / signal analyser.

I will probably use a first IF of around 600 MHz and a 2nd digital IF of
around 30 MHz which will be directly digitised using the ADS548. If
I choose a sample rate of 4X the IF frequency I can translate the signal
to baseband without needing to use any multipliers. Then I can do further
processing using the FPGA. The DE2-115 has a VGA port, Gigabit
Ethernet, Audio DAC, loads of RAM etc so potentially the entire radio
could be implemented on it. Of course at the moment it is no more than a
thought experiment! The inspiration for this was my reading of a service
manual for a Agilent Vector Signal Analyser. I suddenly realised I had
just about everything (except software) to make something similar.
You may think I am mad but I am looking for interesting things to do
with FPGAs and as I have been writing an FFT that runs on an FPGA this
seemed a great little project to do 'one day'.
Posted by G4GUO at 07:43