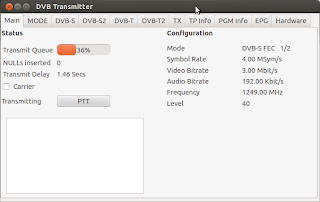 Here is the latest screen shot of the host software. I have made some minor
changes including a transmit delay, which shows the time delay from the video
capture to actual transmission.

I am now working on making the software more robust and tiding it up
internally. I have working versions for 32 and 64 bit Ubuntu. Also I am
trying to remove all the machine dependencies so that it should be able
to compile on a MAC. I don't intend producing a MAC version but I have
been made aware that someone wants to try doing that.

I found an issue with USB VBUS handling which meant if you pulled the
USB cable out the board went into suspended mode and did not recover
when the cable was plugged back in. I also was not allowing enough time
after an FPGA reset before I started to try to load the FPGA configuration.
That now should perform correctly.

One outstanding problem is that libusb can be very delicate as can the V4L
stuff. there is not much I can do about that other than follow the programmer's
guides to the letter and hope.
Posted by G4GUO at 17:57